Of course I meet lots of people, mostly men, who can’t or won’t believe that a world the way I see it is possible. No, that’s not how the world works. OK, I know you have to keep your feet on the ground, but on the other hand, the way I see the world influences the way I live in it. If you believe something can’t be done, it can’t be done. In your world at least. And that is the only world where we meet… so far.

Often I hear this complaint:

I’m all for idealism, but when push comes to shove I still have to choose between me being hungry or the other fellow hungry.
Everybody chooses food and let’s the other guy go hungry.

You recognize this thought pattern?

A biologist once explained me that the human brain have a kind of primitive brain that is only used for the most basic task: Survival. This brain is a leftover from the time when human beings, at least according to Darwin, were reptiles, and that is why it’s still called reptile brain.

If you can’t think beyond the point of “eat yourself or go hungry”, you only use your reptile brain. I’m not amazed that this is exactly what you see in a crocodile pond: Big bites and big mouths. No leftovers for the next guy, the whole world is my enemy! Bite!

Of course it’s up to the individual whether he or she chooses to live with people who have this dog eat dog mentality. Do they really not care about the others? 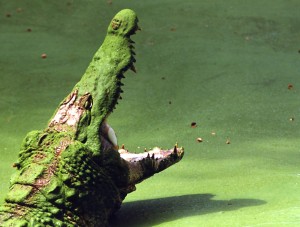 It’s a dog-eat-dog world in the crocodile pond. Photo by Kevinzim.

That depends on who “the others” are. Even the cruel, selfish and hard crocodiles have a weak spot. Mothers. They have that special gift to protect their young for the first year and a half in their safe mother-mouths.

Apparently the crocodile is a cruel monster that eats everything and everybody but herself and her young. If the whole world is their enemy, as I said earlier on, the young is not part of “the world”, but part of the “mother-self”! It’s me-and-my-young against the rest of the world. And especially, the rest of the world against me and my young. Because that’s the way it works in the crocodile pond.

It’s the same with human beings. A mother shares her food with her young. You could say, she is her child, she’s one with her child.

Do you recognize that? That feeling of unity? Do you feel it with your children, your pet, your partner? Maybe the feeling of empathy? To be able to put yourself in some one else’s position? These are functions of the limbic system. This part of the brain is a lot more modern than the part we have in common with the crocodile. You could say that this is what makes us human. We are higher animals, not crocodiles that kill each other to get the last bite.

Lots of people see me as some kind of “eco-knight”, a “green Don Quichote”, because I don’t own a car and I am vegetarian. I don’t want a car because they smell. When you drive yourself you often don’t smell your own car, so I didn’t take that decision purely out of self interest. No, the world around me and I are one, and I don’t want to pollute my “self”. It hurts me to see the state of the world now. I feel the pain of the Earth. And that is why I say there is no border between me and the rest of the world. Maybe this example is a bit far-fetched, so let me find another, easier example.

When I was a child we saw these spots on TV at Christmas. Hungry African children with swollen bellies. My mother used to say we should be thankful that we have it so well. Now I know that our abundance is their shortage. And I am not thankful or happy for that. How can I be happy with our “welfare? I can’t any more. I am unhappy with our “abundance”, we should share it with those who have shortages.

Again this is an example of me and the other. There is no difference between me and Africa. I don’t see the difference. Who wants to see the difference at all cost, is deluded. I breathe the same air, drink the same water and live on the same planet as any other being. I am in the mouth of the world-mother and my mother is a crocodile.