An IT technician often has to solve a determined problem. In order to gain insight in the problem and its solution, you design models. Just like in the world of fashion. A fashion designer cuts the all the sizes before cutting and sewing. 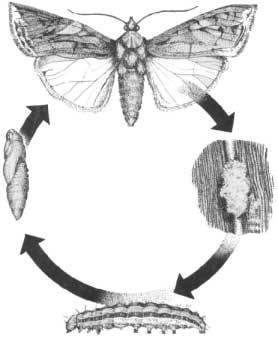 The life cycle of the Moth

I opted to learn more about making models and techniques to make these models. Handy for a dreamer, because than you can exchange dreams with people who can read and understand the same pictures.

There was one teacher who influenced me a lot and his name was Rob van de Weg. What makes his work special is that his starting point is the life cycle of objects. Life cycle is a notion you probably know from your biology classes. It’s the same in IT. Objects are born, run the course of their lives and are cleaned up using the “die” function.

The system’s garbage collector clears memory so you can let new objects be born in the same space. The same applies in biology. When you throw the mowing of your lawn on the compost heap it is converted into raw materials by bugs and bacteria. This raw material we call compost and looks a lot like earth, the fertile topsoil of our planet.

When I was about top graduate I buried my nose in books about life cycles and drew models about objects in a hospital. In the back of my head the mission to re-design the monetary system, the mission I set myself when I met the Minister, was waiting. But isn’t recycling part of that economic system somehow? How did they think about that, back then when the king minted his first coin?