Skip to content
Home » Colourcash, the book » Part 1:Origin » Looking for a meaning 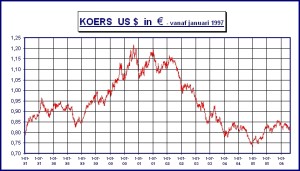 The “size” of the Dollar changes continuously. How can you use a changing unit as a foundation for a society?

One of the courses was about the semantics of programming languages. What is meant by this is:  the formal meaning, solidified rock hard. An example. Everybody knows what a meter is. The real, original meter lies heavily guarded in Paris, because that measure was the calibre for all the copied meters. A clear example of semantics: record precisely what you mean. Write down exactly what you mean: the meaning.

Meanwhile I was still stuck with the Enschede Vision and the economic reality. Even science had succumbed to economic “progress”.

Then I found out the secret of money: it has no meaning! No meaning has ever been set. The meaning of money as such is based on trust, something I can’t have in money. The days that money could be exchanged for its value in silver or gold are over, and have been for a few decades.

When you ask Google “define money”, you get a number of articles on how money works. Money is a means of storage and exchange of value. How this value is determined is unknown. Compare to this: a meter is a unit of length. How long the meter is, is actually unknown. So, 1 dollar equals 100 dollar cent. Genius. One meter equals 100 centimetres. And how long is a centimetre exactly?

Semantically the meaning of money remains undefined. This is the weak point in money and I think it’s also the cause of some of the biggest problems economists have to face: interest, inflation and moving big capital from country to country. Poverty is not a real problem, it’s part of the game.

The absence of semantics also has a flip side: interests. Do you have a mortgage? Then you pay more in interest than in actual capital payments. Is this fair? Yes, because money doesn’t have a definition. It’s nothing but a growth pattern, a multiplier. A Euro today is not the same as a Euro tomorrow. If you borrow today, you pay back more tomorrow. If I borrow a loaf of bread, I give one loaf back. The same for a cup of sugar. But, a heap of money for a heap of money, plus an extra bucket of money. Growth pattern!

Let’s investigate this a little closer. Imagine, my trousers measure 95 cm. Tomorrow these same pants measure 98 cm. Witchcraft? Have the trousers grown? No. The ruler has shrunk. No economic growth, the currency shrinks. This is called inflation. I call it rubbish. What’s the use of a ruler that shrinks daily? Kindling is all it’s good for!

It gets a bit more complicated when we move money. You probably think of the “left over currency” in your pocket after coming back from a foreign holiday. This is not what I mean. I mean amounts to the amount of the sum of the monthly income of a small nation. These amounts are moved with the press of a button, electronically, from accounts in Brazil to accounts in Moscow or London. In the old day you’d only move these sums if you moved products to the other side. That’s the way it’s supposed to be in an economic model, the production chain: Money goes one way as recompense, a payment for goods that come from the other way and change owner. But this Mega transport of funds nowadays does not have a counter weight in goods. There are no consequences, or so they say… But in reality there are consequences, because this “money-fuge” is the origin of a financial crisis. What happens? Investors find out that the money in say Brazil is in danger, because they no longer can pay the interests. So you quickly move the money, before the bank or the state goes bankrupt and I lose my money. When the first pile of money moves, many follow. Whoever is too late and whoever can’t get out, sh*t happens. Those that can’t get out, can’t leave, are, of course the inhabitants. The investors just start over in another country.

So, at this stage in my life I was confronted with a riddle: You have a vision you want to make come true, you possess the rock hard economic truth and you know for a fact that money is nothing more than an undefined unit of measure. That money being a vague unit is the hidden cause of a number of complex economical problems. Ordinary people lost the clue a long time ago. Economists take the problems as fact. Guess twice what needs to be done.

I was trained as designer of information systems. The monetary system is the biggest and most influential system on this Earth, apart maybe from the clock and the calendar. But the design is so faulty that the base, money in fact is an unknown factor. And we trust this unknown factor?

The lack of meaning is a handy tool for banks. When you take out a mortgage, the bank lends you the money and you pay an annual 4% of the amount to the bank in interests.

Question. Where was the money BEFORE the bank used it to buy your house? In a safe? In a bank? The answer is NO, that money didn’t exist. When you borrow Euro 100 from the bank, 7% of this money was put in there by a saver and the rest in new money. The money is created the moment you borrow it. To borrow something that didn’t exist beforehand you pay thousands of Euros annually! What a joke!

The monetary system works the same way. If the government introduces an ecotax tomorrow, the day after the whole car and air travel sector gets messed up and a week later the whole economy suffers. Whenever we right one wrong, we get innumerable other errors in its place.

Economics is like an unstable house of cards. It’s actually a miracle that it still works, I mean, it’s a small wonder you haven’t seen through the trick that makes it hobble ahead time after time.

If I had to repair the monetary system as a programmer, I wouldn’t try to adapt it. I would make an entirely new design and so write a whole new program. You can’t fix the design of the economy because there never was any design. Its functioning is a disaster. Implementing the necessary changes is impossible because that causes the system to collapse. Crash!

Poverty, unjust division of welfare, hyperinflation, fraud, shortage of raw materials, waste mountains, pollution, exploitation, slavery, child labour, waste of energy, climatic changes, commerce wars, drugs, Mafia, homeless people, prostitution and war. In a word, unhappiness. All glitches in the program and for none of these a solution was found. I’m sure you can add some to the list.

Let’s see what these glitches look like. Companies are known polluters. And they are allowed to pollute to a certain extent. Losing precious materials costs them money, but this negative balance can be righted by the profits on other products or, on other parts of the same product.

Say, I own a refinery and from time to time I spill some oil. No problem, My Company is right next to a river and nobody notices anything, or at least let on they don’t notice anything. I did lose a few tons of raw materials; I lost those in the river. From a financial point of view there’s no real problem. The damages are so small that I can make up the loss by the next sales order. Nature doesn’t share my point of view however. That colony of swans downstream doesn’t like crude oil at all! A fine wouldn’t help either with companies that make a $ 10.000.000.000 profit per year. The profit gets a bit smaller, but they will survive. But the swans won’t. They can’t compensate the damages done to them with the fine paid by the refinery. Here you see that the way the system works does not coincide with reality.

Another example: the greenhouse effect and global warming are getting on the way. More is to be expected. Are we going to do anything about it now? No, conferences stumble along from failure to failure just because the country which has the most arms, the United States of America, pressures the other countries. Otherwise the States would boycott these countries. Or..or else we’ll invade Liverpool.

The problems interlock. None of them can be solved because one solution makes other problems even bigger and worse. That’s why governments have been sitting around for years, waiting to take action.

But they, the governments, won’t take any action
because they don’t dare, because they know it can’t be done.

That’s why around 1995, I decided to re-design the monetary system. But this time in way that the value of the money coincides exactly with the Natural rules and laws. The Dutch Minister for the Environment, Margreeth de Boer, gave me the idea. How did that come about?

Our Organization JP Doe, was one of the few platforms the national organization NJMO had been able to set up. This club met once a year, which now is a part of the National Youth Council, with the minister for the environment. I attended one of these meetings as a depute from Enschede.

Minister Margreeth de Boer talked about “ecologising” the tax-system. Ecotax. She would have liked that very much she said. She had ordered lawyers to investigate the possibilities but the result was, alas, that this tax was not possible: There were too many laws that hindered the implementation.

Before you know it I digress to the fact lawyers made laws that are so complicated that they even obstruct themselves, but let’s stick to the subject for now.

The minister promised to look into making the subsidy system greener, now ecotax was out of the question. The other youths of the NMJO thought it was a good ides, but I didn’t trust it. I said that that would be too difficult as well. Why don’t we look into making the whole money system more ecologically sound? That was a sentence nobody understood. Not even me. But in the years that followed I got to understand what that entails. I had to learn to make better models before I began to fully understand.