What follows is a philosophical summary of the most important point that make up the base of colourcash. Colourcash is not just a coloured sort of money. It’s a holistic approach to living. You can’t take out “the juicy bits” and leave in the hard stuff… It’s take-it-or-leave-it package.

This package isn’t really open to discussion. It’s like the seed of a tree… Small, yet big enough to contain all the necessary elements to grow. You have a say in where to put the tree, you can choose the earth you plant it in, how to prune it, these are the topics we treat in the third section, like tax and insurance.

Colourcash is a system where the price of everything is represented with the colours red, green and blue.

We can differ in opinion and that’s OK. This way you can choose universal colourcash, yet give it your own “meaning”.

Everything lives, everything is nature

Everything alive has a beginning and an end. Everything that goes on living, lives in a cycle. Because of the cycles, generations can succeed one another.

This is true for man and animals, but also for plants. It’s even true for minerals, planets and stars. Their life cycles are longer than ours and these life forms are often considered as non-living. They are not built of the same elements we are, carbon, water and oxygen. But so what? These elements are nothing more than a vehicle for energy.

Because we know they have a beginning and an end, they are alive.

There is only One Truth, but it can be known
in very many forms.

We, as human beings only need to investigate this truth. It’s not about who has the “absolute truth”, Nobody has. Everybody is subordinate to the truth and the story, the point of view of each and every human being contributes to this truth to the same amount.

There’s an old Dutch saying we use when two people are fighting about “who is right” … the truth will be somewhere in the middle. This is only a part of the truth, the truth is a duality of both points of view. Both are right, from their point of view.

A unit is the smallest part that can’t be divided without losing the whole.

The potato, man and bicycle are units. Also colourcash is a unit. You can’t just take out parts because they suit you. 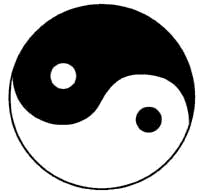 Yin-Yang, a symbol of duality.

The whole can be divided using a duality or a trinity. We are familiar with duality, right/ wrong, good/bad, left/right, more/less and black and white. The Yin-Yang symbol teaches us that dual partners can’t live without their counterparts.

Colourcash prefers a trinity. A trinity keeps the unit united.

All trinities are the same

It doesn’t matter whether you chose the trinity Red-Green-Blue or another trinity. You are recommended to think for yourself first: What could be the meaning of the colour Red? Obvious, isn’t it?

Red grows during life and diminishes towards the end, just like the sun rises, turns at its highest point and sets again. Red is the heath of the stove, the light of a lamp, the force of a shot and the love of your wife.

Green: living matter. Everything that gets recycled.

You find green in food, water, earth, compost. Green is the building material of life, the Earth’s womb, your cradle and your grave. Green is the leaf on a tree, even if it’s yellow the day it falls. Green is the pure rain water. Green is the manure you spread on the land.

Blue: all matter that’s been taken out of its life cycle and isn’t deliberately recycled.

Now you know the meaning of the colours and I’m sure you will have noticed that the colours have been based on the difference between energy and matter on one hand and matter on the other and the division between closed and open cycles. But when we want to calculate, we need a base. After all, how long is a meter?

Definition of the unit based on sunflower oil

The energy in 100 gram sunflower oil we consider 1 Red. That is 3400 kJ or 810 kcal. The substance we reckon as 1 Green. When you change the oil chemically into non-biodegradable plastic, or you render it unfit for recycling in any other way, the substance is reckoned as 1 Blue.

This yields the following definition:

Alternative definition for the US

The United States and possibly other countries have not adapted to the metric system with its kilograms and meters, but use imperial or United States Customary system. Using 100 grams of sun flower oil may be a bit unclear. A redefinition in pounds is as follows:

Looking for long and short time equilibrium and balance is the goal, the road to success.

You can recognize balance by the long-term, dynamic equilibrium between Red, Green and Blue. Every year the balance is made up and debts are reset to 0. But, all transactions and the yearly totals will be stored and publicly available. It doesn’t make any sense to accumulate debts. The unbalance became clear a long time ago. We only need to know and acknowledge the unbalance, not to rectify it.

When you use the ordinary Gregorian calendar, you will probably choose 31 December or 30 June. If you use a 13 moon calendar, keep July 25 as a date, it’s a holiday by the name of “day outside of time”.