If you want to know how we’re being screwed three times by the bankers, you do have to go through a dry piece of theory. Well, we do offer a cool workshop instead, but for now, just read on please.

How do they issue money?

It all starts with the question “How does money enter the game“. We’re not referring to how it’s being printed or coined. It’s about how we get it on our digital accounts.

Nearly all of the money (97%) is created by banks in the very moment one of their clients is taking a loan. Only a small fraction of this amount – about the size of the purple brick in the image – is actually owned by the banks. The rest of the money – all of the yellow bricks – are created while taking the loan.

In the example of the illustration, someone has taken a mortgage of € 100.000 for 20 years at an interest rate of 5%.  Every piece is worth € 5.000. This example will illustrate the principles involved, even when nobody is using these exact figures.

1. Screwed for the first time 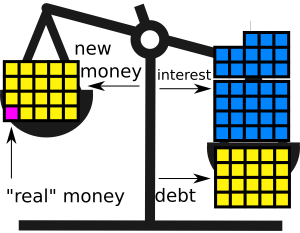 Pay back the amount plus interest of a debt, but the money borrowed did not quite exist before.

Only about 5% of the amount was actually owned by the bank when the loan was made. The other € 95.000 is created by pressing the button. It’s only a fraction they have, which gives this principle the name Fractional Reserve

Well, the loaner also pays 5% interest, which is also € 5.000. By the end of year 1, he has already paid back the bank whatever they had before they made the deal. The remainder of the 20 years, he will be paying big money – interest and payback over an amount they did not really have. That’s what we call “srewed for the first time”.

This is a private, individual one. The second time is more like a group thing. We’re all being fucked here, simultaneously. It has to do with the unmistakeable crisis.

2. Causing a crisis on purpose

To see how the money creation principle is causing crisis on purpose, we need to study what happens during the rest of the example. See the right hand side of the scales. The yellow bricks entered the game when the loan was taken. The blue blocks are the interest. But at what point in time do those enter the game?

When do the blue bricks enter the game?

Of course you need to earn it. But these blue bricks do never explicitly enter the game. In fact: they can’t even exist. They can only be “yellow” bricks, produced by a bank when someone else coming later than you, also takes a loan.

Here we get to the next trick. Someday, there may not be somebody taking that loan. No “growing economy”, or booming trend. They give you a  “no” and you’re bankrupt. You’re the weakest link, taking the blame. But is it really your fault?

No. There just is not enough money in the universe to cover these debts. There can’t be, because debts increase due to interest, while the amount of money can’t catch up on that rate. It’s a debt crisis, caused by the very principle that issues money. It’s nothing more than a scam, a trick. The trick is that the chain will break at the weakest link: blame them and who will search for a deeper cause?

What happens when banks realize that more and more debtors are unable to pay? They reduce the number of allowed new debts. “Due to enforced rules of Basel I,II,III”. Of course. But, this action will only further reduce the number of new yellow bricks, making more and more of the current debtors unable to pay. And, this is the policy banks have had during previous crises. They act this way on purpose, to move the blame while making the effect even stronger.

This way, the banks are causing crises to occur on purpose, with a tsunami of defaults. This is the second time we are screwed. Can it get any worse?

3. The third time being screwed

At this point, businesses, persons and countries are filing for bankrupt. This makes a cheap deal for those with filled pockets. You remember the ones we gave the blue bricks to. Well they are now using the opportunity to acquire power plants, ports, businesses, public service companies. All at a bargain now. Good deal, multinationals!

Meanwhile, governments really need to cut budgets to repay for the losses during the debt- and banking crises (of 2008, in our era). Therefore, “everyone” is losing jobs, which is the offered again to be done “voluntarily”.

So here is us, being screwed for the third time by the consequences of the crises which they let occur on purpose: a sell out, cuts and unemployment.

Who are making the profit?

But what is actually happening to the money itself: the interests. No, they do not flow into the state treasury. The owners of the commercial banks get it all. That is another deal called Fiat Money. Fiat is Latin for agreement. The State has given up its right to issue money in favor of the banking cartel, whom it has given Fiat.

This is the One-Two between the kings and bankers. They have played it for hundreds of years. Banks loan money to the (to be) Kings, who they have just put to power or who will enforce his power with an army, paid by money borrowed by the same banks. The King pays back the money by tax and toll within the area acquired. Everyone is winning, except for the civilian. We’re being screwed three times.