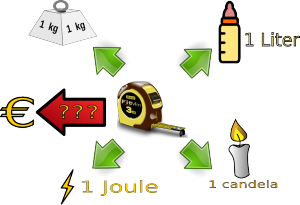 SI-units and a monetary currency

Nobody knows what money is really worth. The true value of a Euro or Dollar. Guesses like “A Euro is ‘so many’ Dollar” is about as far as it goes. This is weird, because in units of physics have been established by Napoleon in the  Systeme International. Engineers from the 18th and 19th century have linked all units like Meter, Kilogram, Second, Watt into a perfect system.

Which units are missing? Economic units.  Economics, the dominant philosophy of late capitalism, works with units which are undefined. Any consequences?

It’s a world the media uses frequently: inflation. Everything  gets more expensive, or, your money becomes less valuable.

Economists usually claim that inflation is necessary (really?) but a deeper question is: is inflation logical? Why would it?

I have never seen that my pants, which are 78 cm long, suddenly shrink to 77,5 cm. You can not tinker with a unit, because, it will leave all your readings useless. And, they are, I say to IMF,  ECB and OESO. 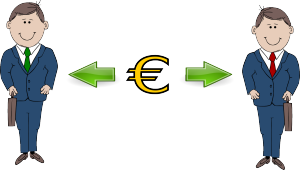 The value of the unit of currency is determined by the pulling on the rubber band, by speculators.

All we can say really about is that ordinary people like you and me, are paying the price. But you already knew that, right? Now here’s something you may have missed.

Willem Hoogendijk, a Dutch lawyer, professor and self made economist taught that money should not be moved around, because entire regions will run down. Both the money and the people. And, this is generally known. Here in the Netherlands we recognize this in areas such as Zeeuws-Vlaanderen, Limburg and North East Groningen. Worldwide we have seen a massive trek from the countryside to the cities. The countryside is running empty, unemployed and it’s aging.

Now do not forget that this is considered a problem by those who think we need to grow. They think. Wrong problem guys.

The problem here is that the money saved by people in the countryside is moved by the banks, to be invested where it’s probably lucrative. In the cities. So, the work also moves to the cities and that’s where the younger generation will go. Amsterdam anyone?

If money were unmovable without a counterpart in the real world moving in the opposite direction – which is done for speculation – then the countryside of the planet was still a habitable place for the many.

Money is nothing more than pure bullshit

They think it’s the way it is: “the economy is only based on trust”. But!

Once you have read the design errors involving money issuing and circular economy, you know there is no longer any reason to support this bullshit system. Let’s make a clear space and discover new possibilities.